We are pulling out a true quickie cocktail classic for this week’s hump day recipe: the Dark and Stormy!

The Dark and Stormy is the traditional cocktail in Bermuda, where the Gosling Bros. rum distillery is located and has been producing the rum used in the drink since the 1800s. The history of the drink is a bit…stormy…but it is believed that it came about due to the fact that the Royal British Navy, who were spending quite a bit of time in and around Bermuda at the time (yay imperialism!), gave their sailors a daily ration of a particularly dark rum blend, and eventually began adding ginger beer to the mix. As we said, the details were probably lost somewhere in an alcoholic and sea-sickness haze…But no matter! The drink is delicious.

For the traditional Dark and Stormy, you will need:

Gather your ingredients plus your jiggers, fruit press, bar spoon and serving glass.

Fill your serving glass with ice, and then measure out your 2 oz rum and pour it straight in there. For this drink to really work, you want to use a very dark rum that has a lot of flavor from the oak barrels. We of course recommend Gosling’s, which is the traditional rum used in a D&S. 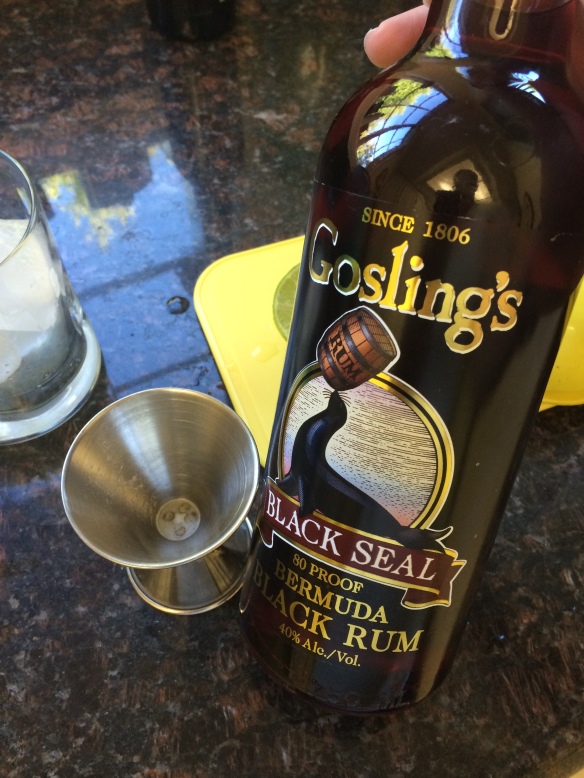 Add in your ginger beer (Gosling’s has their own blend, which we also recommend).

And finish it off with your 1/2 oz lime juice.

Give the whole thing a stir, and you are ready to go!

Do you feel like a member of the Royal British Navy in the 1800s? Actually, we hope you don’t — that probably sucked.